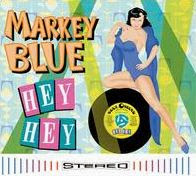 I just received the newest release (September 16, 2014), Hey Hey, from Markey Blue and it has style. Opening with When Loves Comes Along reminding me a bit of a BB King track with more swing. I Can't Let You Go is a R&B style ballad with sweet guitar riffs from Latina and cool horn and keyboard backing. Something's Wrong again has a R&B feel with nice horn punctuation. A strong radio contender with a solid melody and a hook, this is a straight seller. Feeling Blue has a strong strut, cool backing vocals by Holly Steele, a stinging guitar solo from Latina and super horn work making it one of my favorites on the release. Flames has a real Billy Preston feel from the key style to the rhythmic beat. Latina again steps up with clean guitar riffs echoed against electric piano. Very cool. Play Me has a real nice groove and Markey's vocals are as clean as they come on this release. Another track that could garner a bit of airplay, features Jack Pearson on guitar. Another Lover really quiets down the pace and slips into a solid soul feel. Solid guitar work by Latina on this track adds a strong contrast against the overall mellow feel of the track pushing Markey into the next level. With You is another really nice track reminding me of earlier times with Jo Baker with Elvin Bishop. Nice backing vocals and guitar riffs cushioned by a bed of horns makes for another of the best tracks on the release. Ain't No Angel crosses over to rock with an easy sway. Nightclub styling and full orchestration with horns, organ, guitar, bass and drums gives it a powerful impact. By My Side is another strait forward radio track and could easily get strong radio play with it's catchy melody and easy beat. Wrapping the release is Baby I'm Cryin' has a R&B styling but strong blues roots along the lines of Robert Cray. A strong closer, it's one of the strongest vocal performances on the release with really warm backing vocals and clean guitar and organ additions.