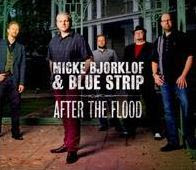 I just received the most recent release, After The Flood, from Micke Bjorklof & Blue Strip and it rocks. Opening with House For The Blues, a blues rocker, Vocalist Bjorklof and guitarist Lefty Leppanen set a strong pace backed by Teemu Vuorela on drums, Seppo Nuolikoski on bass and Timo Ruiko-Jukela on percussion. On Jack The Black Hat, the band takes a more expansive journey with heavier vocals, distorted guitars and free wheelin guitar work. Cool! Water From Your Shoe is a solid R&B style pop track with a taste of New Orleans featuring super cool piano work from Brian Coogan. Woogie Or Die is an interesting boogie track with a cool bass line. Soaring slide guitar work from Lefty give this track a sharp edge and Bjorklof's vocals with his edgy harp playing adds to the edge. Understanding opens with a slip sliding guitar part and a Latin influenced drum part. Having the flavor of a traditional western theme song with a twist, and backing vocals by Michaela Harrison and Alexis Marceaux, this is one of my favorite tracks on the release. King Alcohol is a melancholy track with bluesy overtones and subtle instrumental accompaniment, especially tasty guitar riffs. Sometimes is a boogie with a different kind of walking of bass line. A cool rocker, Bjorklof does some of his best vocal work here, complimented by Coogan on Hammond, and a solid rocker is the result. Gumbo Mama has a nice funky march beat and spirited vocals with punctuated vocal backing. Lefty lays on the wah wah adding a cool guitar texture and a little smoke to the funk. Really nice! Jezebel has a cocky strut and Bjorklof really hits it square on vocals on this track. Lefty grinds out some of the best guitar work on the release on this track. Very nice! Ramblified falls back to a delta style with rudimentary raw vocals and primitive National Steel guitar riffs. Cool! After The Flood is a smooth Latin influenced rocker with a lot of polish. Percussion by Ruiko-Jukela, nice guitar riffs by lefty and warm vocal backing by Harrison and Marceaux. A solid radio track with a solid melody. Wrapping the release is Open Up Open, a bluesy ballad with an ethereal guitar vamp in the background. Nicely blended backing vocals add substantially to the overall effect of this track but overall, Lefty really shines on this track making it his best showcase.