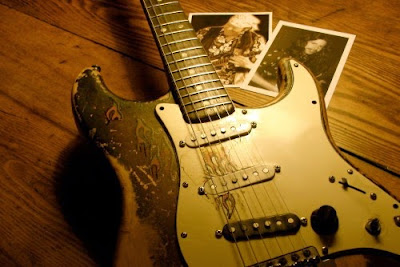 I just received the newest release (June 27, 2015), Old School Thang, and it's smokin! Opening with blues rocker, She's Gone, Billy Hector on vocal and guitar is backed by Tommy Labella on sax, Steve Jankowski on trumpet and trombone, David Nunez on organ, Tim Tindall on bass and Sim Cain on drums. With a Latin flair, the horns seem to make the tune sway in the breeze, anchored by Nunez and Hector splits the hurricane with sweet guitar riffs. Don Nix's, Goin' Down comes out hot and heavy with tributes to the mixes by Freddie King and Jeff Beck. I've always loved this track and Hector launches right into it with both feet. This track rips! On the funky title track, Old School Thang, Hector fuses James Brown and his own style of funk for a cool but nasty guitar jam party. Winston Roye drives hard on the bass and Cain really nails the drum kit. Very cool! Fake ID has a really strong swagger, emphasized by Hector's slide work and additional guitars by Micky Melchiondo. Tim Tidell on bass and Sim Cain hold down the bottom as Hector and Melchiondo jam. Nice! Vitamin Big Daddy is a slinky blues track with a horn melody pumped up big time by Labella and Jankowski. I really like Hector's slide work on this track. Excellent!! Country flavored blues track Come On Home has a bright rhythm with Winston Roye on cowbell and Ken Sorenson on harp. Evil Slick 'N Sly is a slinky track with a contagious guitar riff and stiff drum reinforcement. With that I Put A Spell On You kind of vamp, this track is really hard to beat. Hector even hows at the moon as he blows off the wicked guitar riffs. Excellent! Springy and light, Hammer, has a jazzy blues approach. Larry Crockett takes over the drums on this one and Hector stings like Albert Collins surrounded by an easy funky guitar rhythm. Rita is a really cool swampy blues with Hector's vocals backed by Suzan Lastovica and Joshua Mark. A gritty guitar solo on this track instead of horns straight from Bourbon Street gives it a fresh flavor. Excellent! Down and dirty, Short and Sweet Blues finds Hector attacking guitar blues straight on old style. This instrumental track complimented by Nunez on organ, Labella on sax, Pete Maurer on Trombone and Carlos Francis on trumpet is hot! Wrapping the release is super funky People Of The World. Rich Monica takes the drums on this one and Mel Taylor steps up with a hot sax solo and Hector grabs it and shakes it hard. Super, primarily instrumental conclusion to a really smokin release!